What girls most fantasize about 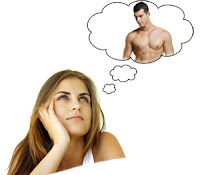 If you think girls don’t sit around fantasizing about very naughty things, think again. They are experts when it comes to dreaming up the sauciest of fantasies, and they don’t bother limiting themselves to the traditional. Many girls want to do more than just fantasize. Some spend just as much time hoping their men will help put their female sex fantasies into practice. Sounds interesting? Read on!

Dominating
Girls love a big strong guy who can sweep them off their feet and carry them into the bedroom, but you may be surprised to learn that one of the top female sex fantasies is to have that same big strong man begging for sexual release. The whole scenario revolves around you worshiping her body and begging for her attention. Why? She gets to be in control while enjoying total devotion from her man in the process. What more could she want?

It seems that modern, independent women actually prefer real men who aren't afraid to embrace their testosterone. They really do fantasizes about you pinning her down and thrusting her thighs apart with your knee. They want to feel your fingers snake through her hair and pull her head back; she wants to feel your teeth on her shoulder; she wants to be owned -- if only while in the bedroom (after which, she’ll want a clear return to equality). This win-win female sex fantasy scenario allows her to fully indulge her femininity.


Sex with a stranger
Most girls have thoroughly enjoyed at least thinking about having wild sex with a complete stranger. No-strings-attached sex is something many girls love to experience, but most are dissuaded from it thanks to a lofty load of self-produced guilt. Nevertheless, her libido definitely gets fired up at the idea of a sexy looking guy approaching her in a dark, smoky pub and taking her back to his house for a long, hot night of wild sex. This female sex fantasy appeals to her naughtiest side -- the kinky one that rarely sees the light of day.

Force
Force fantasies are massively popular among women. Most psychologists believe this sex fantasy allows a woman to have the wild, dirty sex she craves, without having to suffer the guilt that often follows. These sex fantasies usually involve a good looking, muscular guy carrying her off to his bedroom and quickly getting down to business. She’ll protest as he tears her clothing off and expertly arouses her body, but on the inside, she enjoys every second!

Stripping
Most women don't have the nerve to strip in public, but this sex fantasy definitely involves taking it all off. She loves the idea of tantalizing you with a striptease, and she’d love to give you a private lap dance. Why? Your enjoyment tells her you find her attractive, and your hard cock tells her she's in control - a potent combination that women simply can’t get enough of.